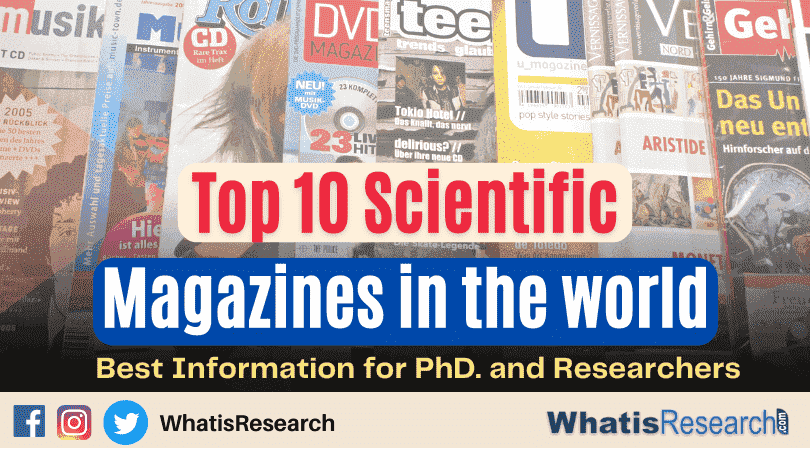 Scientific research magazines are always the key source of information for all new innovations. Thousands of popular magazines exist in the world in the field of Engineering, Science, Technology, Medical Science, etc. Here are the top 10 Scientific Magazines in the world.

Top 10 Scientific Magazines in the world

Science, also widely referred to as Science Magazine is the peer-reviewed academic journal of the American Association for the Advancement of Science (AAAS) and one of the world’s top academic journals. It was first published in 1880, is currently circulated weekly and has a subscriber base of around 130,000. Because institutional subscriptions and online access serve a larger audience, its estimated readership is 570,400 people.

Scientific American is an American popular science magazine. Many famous scientists, including Albert Einstein, have contributed articles to it. It is the oldest continuously published monthly magazine in the United States (though it only became monthly in 1921).

It is an American bi-weekly magazine devoted to short articles about new scientific and technical developments, typically gleaned from recent scientific and technical journals. Science News has been published since 1922 by Society for Science & the Public, a non-profit organization founded by E. W. Scripps in 1920. American chemist Edwin Slosson served as the publication’s first editor. From 1922 to 1966, it was called Science News Letter. The title was changed to Science News with the March 12, 1966 issue (vol. 89, no. 11)

Popular Science (also known as PopSci) is an American quarterly magazine carrying popular science content, which refers to articles for the general reader on science and technology subjects. This magazine has won over 58 awards, including the American Society of Magazine Editors awards for its journalistic excellence in both 2003 (for General Excellence) and 2004 (for Best Magazine Section). With roots beginning in 1872, Popular Science has been translated into over 30 languages and is distributed to at least 45 countries.

Cosmos (styled COSMOS) is a science magazine produced in Australia with a global outlook and literary ambitions, published by the Royal Institution of Australia (RiAus). It appears four times a year in print, and browser-based subscriber editions. It has a readership of 87,000 in print, and 130,000 via browser subscribers. Its Internet sister, Cosmos Online, publishes daily news and has an audience of 400,000+ unique visitors and 1 million+ page views monthly. It is subtitled “The science of everything” and is described as “a magazine of ideas, science, society and the future

Must Read: How to make PPT for international conference

Discover is an American general audience science magazine launched in October 1980 by Time Inc. It has been owned by Kalmbach Publishing since 2010. Discover was created primarily through the efforts of Time magazine editor Leon Jaroff. He noticed that magazine sales jumped every time the cover featured a science topic. Jaroff interpreted this as a considerable public interest in science, and in 1971, he began agitating for the creation of a science-oriented magazine. This was difficult, as a former colleague noted, because “Selling science to people who graduated to be managers was very difficult.

This is published by the Stanford University School of Medicine to share their research, opinions, and news to educate the general public. Each edition focuses on a specific topic, for example, Fall 2015 published articles on ‘Childhood’ and Summer 2015 focused on ‘Skin Deep’. Their online magazine also publishes podcasts, blog posts, and videos that explore each issue’s topic, which is interesting, thought to provoke, and insightful. But beware – it’s easy to spend hours reading!

IEEE Spectrum is the flagship magazine and website of the IEEE, the world’s largest professional organization devoted to engineering and the applied sciences. Our charter is to keep over 400,000 members informed about major trends and developments in technology, engineering, and science. Our blogs, podcasts, news and feature stories, videos and interactive infographics engage our visitors with clear explanations about emerging concepts and developments with details they can’t get elsewhere.

SO these are the best and Top 10 Scientific Magazines in the world in no particular order. You can follow these magazines regularly to get all the latest updates.